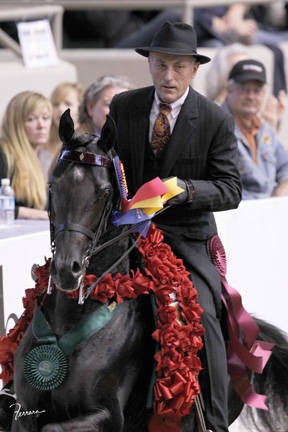 He is constantly setting the show ring on fire, and in 2010, he captured all four of the English Pleasure Junior Horse divisions. He was honored in 2010 with both the AHT Readers’ Choice Horseman of the Year and APAHA English Pleasure Trainer of the Year awards. Jim not only is an excellent showman, but also he is continuously trying to improve the Arabian breed. He is a recognized expert in equine breeding and has bred multiple national champions.

Jim prides himself on his extensive knowledge of Arabian and Saddlebred bloodlines, and has demonstrated an enormous talent in selecting specific stallions that match well with certain mares. Additionally, he travels internationally as a consultant, helping farms develop the necessary programs to reach their management, breeding, and national championship goals. Having won the APAHA English/Saddle Seat Trainer Award in 1995, 2010, an 2011, Jim was inducted into the APAHA Hall of Fame in 2013.